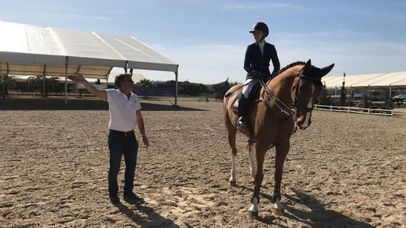 Stainsby Grange has lots of different levels of training opportunities and already has Millie and her Dad, Peter as part of the elite training. As a result of Millie setting up her stables at Stainsby, there is now an opportunity to base with her and make the most of training, everyday use of facilities and being involved in the running of a professional competition yard.

Millie has loved horses all her life and started riding at a very young age. Millie had a very successful youth career, her highlight is holding the record for the most European medals to be won by any young rider. She has represented GB at 8 European Championships and won a total of 11 European medals. She has also accumulated 9 National Championship titles and has over 45 national and international Grand Prix wins including wins at HOYS, Hickstead, OLympia, Liverpool International and the Grand Palais, Paris. Recognising her talent, resilience and dedication to her sport, Millie was chosen to be part of the Olympic Ambition for Rio 2016 and more recently the Ella Popely Mentorship award. Millie has been part of the World Class Programme and after spending time away training at Davenport stables with Swedish international rider Angelie Von Essen, has returned home and set up her stables at Stainsby Grange to further her outstanding career.